GENTLE IMMUNE, STRESS AND ENERGY SUPPORT
Reishi Mushroom supports the immune system, heart and other organs while helping to combat stress and fatigue

Because mushrooms aren’t just for pizza anymore! The Reishi mushroom is an edible fungus that falls under a class of medicinal mushrooms that have been historically used in Chinese, Japanese and Eastern European medicine practices as adaptogens. They’re just starting to gain popularity in western medicine, and can be seen popping up everywhere from your favorite local juice bar or coffee shop, to the snack aisle of health food stores.

These mushrooms are classified as “adaptogens”, meaning they can respond to stress in any way the body needs, either by up-regulating or down-regulating cortisol and other hormones involved in your adrenal stress response.  Reishi’s primary claim to fame is its ability to help support the immune system. But rather than stimulating the immune system like other “immune boosters” do, mushrooms work by normalizing immune function in whatever direction the body requires. It can also support the nervous, cardiovascular and hepatic systems, as well as playing a role in detoxification.

Reishi is used most often as a “general wellness tonic” and has effects on both the innate (short term) and adaptive (longer term) immune response.

If the following resonates with you, then you may benefit from supplementing with Reishi:

In order for you to see a benefit from mushroom supplements, they have to be heated to ensure that they are bioavailable. Because the cell wall of these fungi are indigestible to us, heat is required to break down the wall and make the nutrients accessible. Our supplement is hot water extracted using Traditional Chinese Methods.

Because Reishi grows in the wild, it was important for us to select a supplement that was harvested using sustainable practices and also tested for any impurities, heavy metals or pesticides that may be present in the environment in which it was grown. 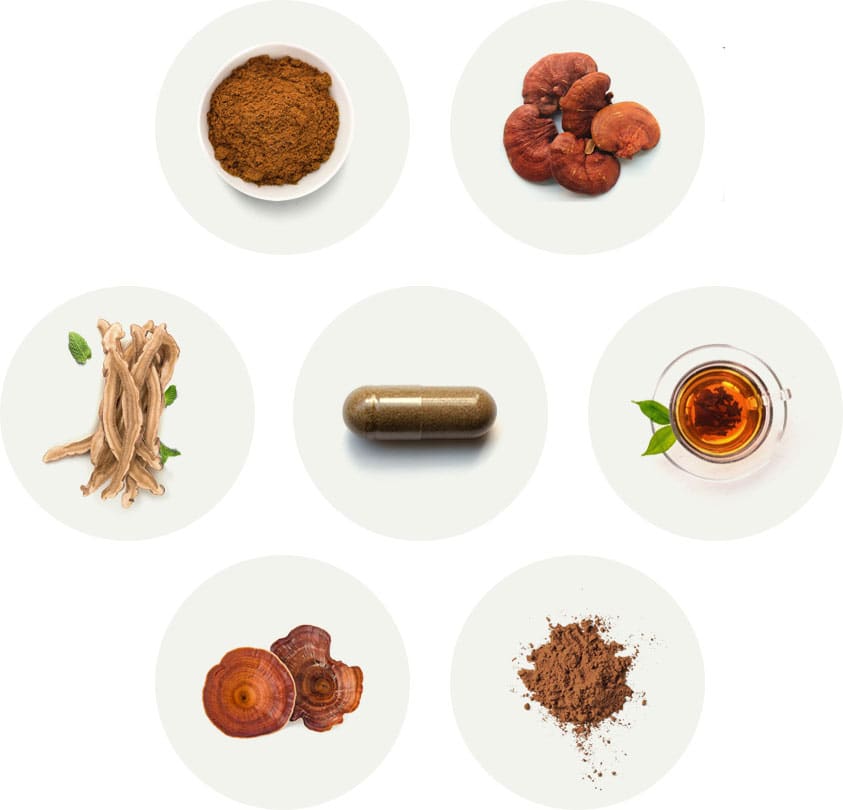 As with many other adaptogens, it may take a while to experience the full benefits of supplementing with Reishi, sometimes up to 4 weeks. For general wellness, we recommend starting at a dose of 1 capsule twice daily taken with meals to prevent an upset stomach.

Doses for medicinal mushrooms can vary depending on if you are using them therapeutically, so we recommend discussing any specific dosing requirements with your primary care provider.

Recommended Use or Purpose: Provides antioxidants for the maintenance of good health. Used in Herbal Medicine to support the immune system.

Cautions & Warning:  Consult a health care practitioner prior to use if you are undergoing chemotherapy treatment; suffer from an immune disorder (e. g. Crohn’s disease, myasthenia gravis, multiple sclerosis, rheumatoid arthritis, systemic lupus erythematosus, HIV/AIDS, etc.); or are taking immunosuppressants. Do not use if you are pregnant or breastfeeding. Hypersensitivity (allergy) has been known to occur; in which case, discontinue use. Irritated skin, nausea, and diarrhea have been reported; in which case, discontinue use.